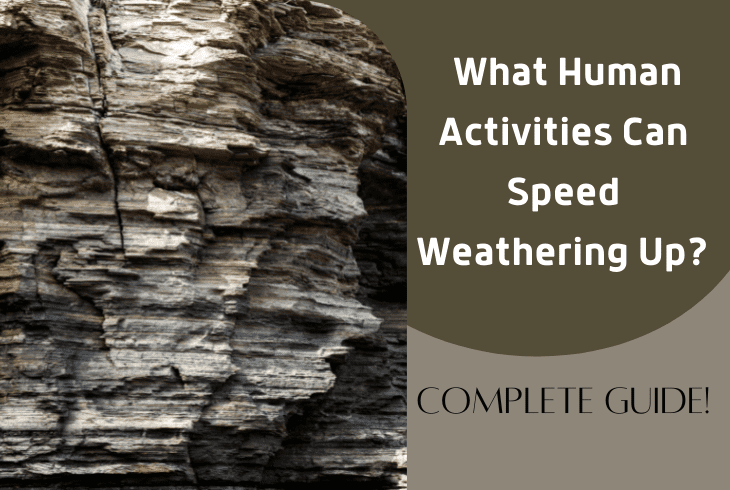 What human activities can speed weathering up?

Weathering is a natural process, although humans may hasten it. In this post, we’ll explain weathering and how different human activities speed up weathering.

Weathering is a natural process, although humans may hasten it. Certain types of air pollution, for example, speed weathering.

When coal, natural gas, or petroleum are burned, pollutants such as sulfur dioxide and nitrogen oxide are released into the environment.

What human activities can speed up weathering? To answer this question, it is necessary to first understand what weathering is.

Weathering is the breakdown of rocks, soil, and minerals, as well as wood and artificial materials, through interaction with the Earth’s atmosphere, water, and biological creatures.

It should not be confused with erosion, which involves the action of rocks and minerals by forces like water, snow, ice, waves, wind, and gravity, transporting and depositing them elsewhere.

There are two major types of weathering processes.

Rocks disintegrate by a process called physical weathering, sometimes referred to as mechanical weathering or disaggregation, without experiencing a chemical change.

The major process in physical weathering is abrasion (the process by which clasts and other particles are reduced in size).

Chemical weathering is the process through which a rock’s composition is altered by repeated chemical reactions caused by water’s interaction with its mineral components.

Chemical weathering is a slow and continuous process when rock mineralogy responds to the environment near the surface.

The original minerals in the rock give rise to new or secondary minerals. The oxidation and hydrolysis processes are crucial in this regard.

Geological factors such as water and oxygen and biological agents such as microbial and plant-root metabolic acids promote chemical weathering.

The weakening and eventual destruction of rock by plants, animals, and bacteria are known as biological weathering. For Instance:

Plant roots may provide tension or strain on the rock. Even though the process is physical, a biological process (developing roots) applies pressure.

Chemical weathering may also be caused by biological processes, such as producing organic acids by plant roots or microbes that aid in the dissolution of minerals.

Lichen is an example of microbial activity; lichen is a symbiotic connection between fungus and algae.

As the process proceeds, holes and cracks in the granite form, exposing the rock to physical and chemical weathering.

What Human Activities Can Speed Weathering Up?

Humans promote weathering in a variety of ways. The quantity of pollution in today’s globe, in particular, is disastrous.

Weathering processes occur all around us, yet many people are unaware of them.

Through pollution, humans do not often recognize how they impact the environment in their daily lives in the fast-paced world.

Here are some instances of how human activities speed weathering.

1. Using Of Vehicles and Machinery

Humans have influenced the pace of acid rain by disposing of massive quantities of pollutants yearly.

Cars are the most visible and destructive source of pollution.

Tonnes of hazardous gasses are released into the environment each year through automobile exhaust pipes.

When these compounds are discharged into the sky, they may be transported for great distances by prevailing winds before re-entering the atmosphere as acidic snow, rain, fog, or dust.

So, What Influences The Acidity Concentration In Rain?

The concentration of hydrogen ions in the rain determines its acidity.

These pollutants, which travel through automobiles yearly, cause significant difficulties across the globe by depleting soils and exposing tree roots.

Many forest regions are being harmed so profoundly that they are under continual danger of annihilation.

Another way humans contribute to speed up weathering is via global industrialization.

Massive industries are dumping garbage and emitting pollutants such as sulphur dioxide (SO2) and nitrogen oxide (NOX), into the atmosphere with the same dangerous qualities as automobile emissions.

This in turn causes acidic rain and hastening weathering.

Buildings and highways stir up the Earth and speed up weathering.

Native environments, such as woodland and grassland, are destroyed in certain areas, exposing the surface to erosion; in some locations, the land that will be built is farmland.

Dirt swept up by the wind is often seen in the air around construction projects. The completed structure may also help to accelerate weathering.

When coal is burned, sulfur dioxide (SO2) and nitrogen oxides (NOx) are emitted into the atmosphere.

Both of these gases contribute to the formation of acid rain.

Recreational activities might speed weathering. Off-road vehicles disrupt the terrain, resulting in barren patches where no vegetation can thrive.

Even hikers’ boots may damage the Earth in certain sensitive ecosystems, so keeping on track is critical.

Deforestation is a key human activity that causes weathering, perhaps the primary reason.

Trees and their roots hold the soil while protecting it from wind and rain.

While the slash and burn method of deforestation emits considerable amounts of CO2 into the environment, it has gained popularity owing to its speed and cost-effectiveness in clearing an area.

This practice exposes soils to wind and rain, contributing significantly to weathering.

Logging, like deforestation, promotes weathering because it eliminates the trees that shield the soil from the elements and anchor it to the Earth.

Already, logging has destroyed a large number of the world’s forests. This has led to topsoil erosion and pollution of rivers, lakes, and estuaries.

As well as contaminating coral reef habitats by importing too much dirt into these places; all these speed up weathering.

Mining is another big business that contributes directly to weathering. Mining, by definition, necessitates the removal of soil to access riches under the surface.

Mining may devastate landscapes by removing not just dirt but also trees that are necessary for soil maintenance.

However, agricultural methods like tillage and livestock grazing contribute to weathering.

It entails churning the ground using machines to prepare it for seeding. This mechanism has been connected to increased weathering.

According to one recent research, tillage is connected with higher levels of topsoil loss, but discontinuing this technique may result in a 60% decrease in soil loss.

Grazing animals, such as sheep, also contribute to weathering by consuming plants and grass and exposing the soil to the elements.

The pacing hooves of these animals also work to churn up the Earth, contributing to weathering.

What human activities can speed weathering up?

The weathering of rock may be attributed to human activities such as the burning of coal and natural gas as well as the discharge of petroleum.

Weathering results in the fragmentation of the surface of the earth into smaller and smaller pieces.

The process known as erosion causes these pieces to be carried away and deposited in other locations. 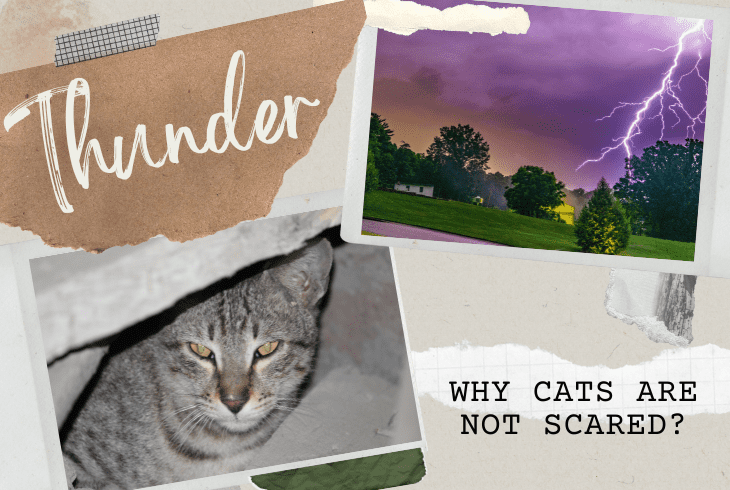 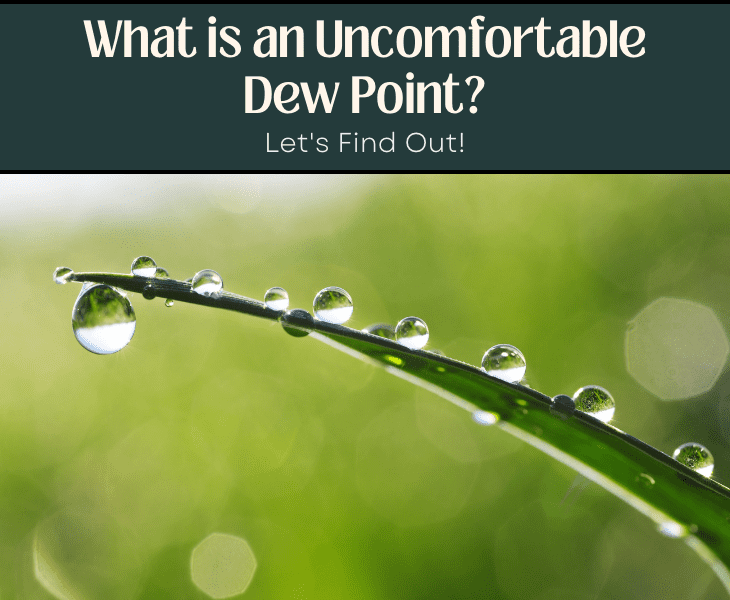 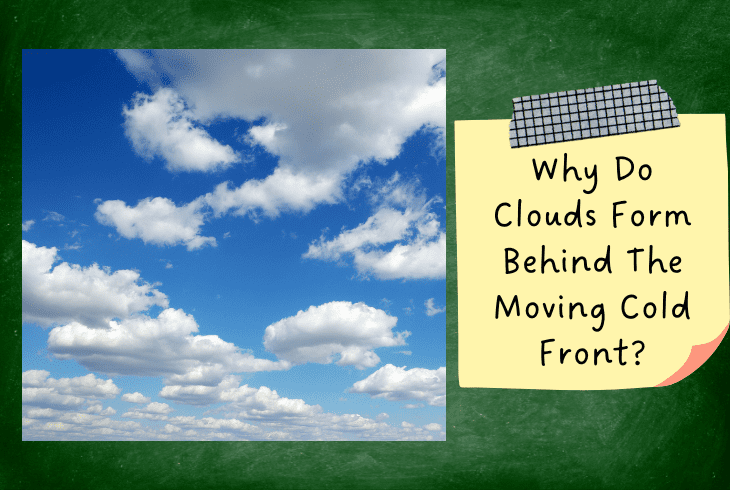 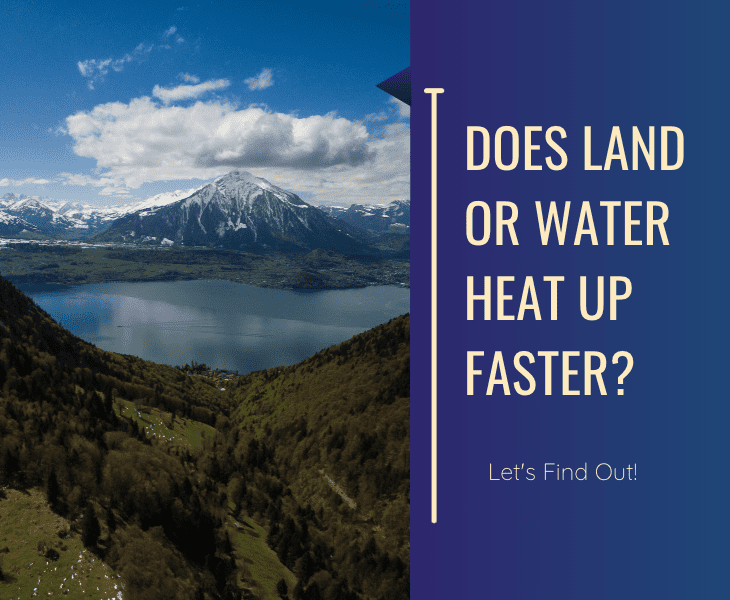 Have you asked yourself, Does land or water heat up faster? This is one question you should be interested in finding out the answer to. When it comes to heating, you may have picked your side already. Is it the land or the water that heats up faster?  You might have already made your mind…